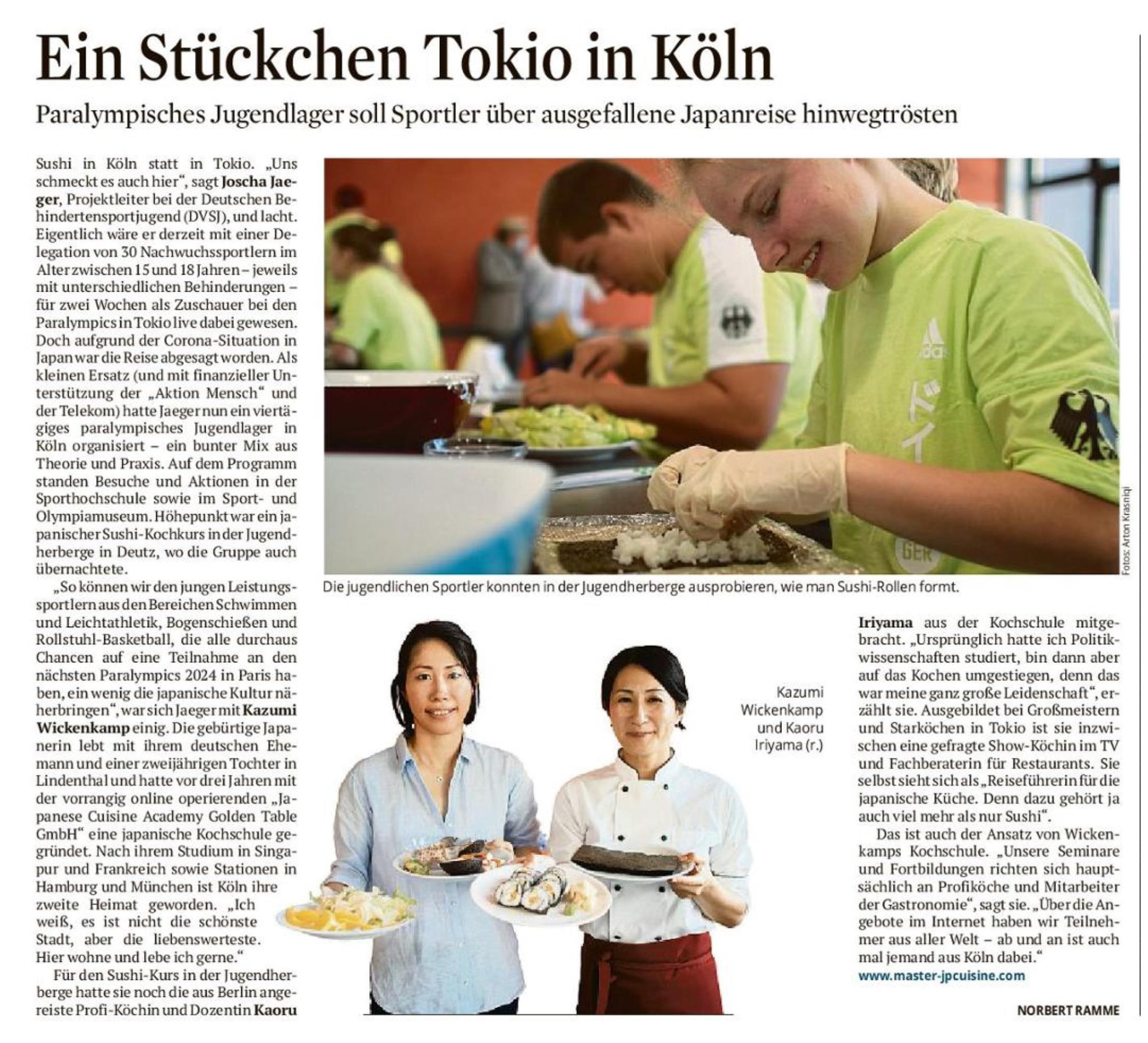 A little piece of Tokyo in Cologne

Sushi in Cologne instead of in Tokyo. "We like sushi that is made here, too," says Joscha Jaeger, project manager at the German Disabled Sports Youth (DVSJ), and laughs.

Actually, at that moment he would have been at the Paralympics in Tokyo for two weeks as a spectator with a delegation of 30 young athletes between the ages of 15 and 18 - each with different disabilities. But due to the Corona situation in Japan, the trip had been canceled.

As a small substitute (and with financial support from "Aktion Mensch" and Telekom), Jaeger had now organized a four-day Paralympic youth camp in Cologne - a colorful mix of theory and practice. The program included visits and activities at the Sports University and the Sports and Olympic Museum. However, the highlight was a Japanese sushi cooking course at the youth hostel in Deutz, where the group also spent the nights.

“In this way, we can give the young competitive athletes from the fields of swimming and athletics, archery, and wheelchair basketball, all of whom definitely have a chance of participating in the next Paralympics in Paris in 2024, a bit of flavor of Japanese culture," Jaeger agreed with Kazumi Wickenkamp.

Born in Japan, Wickenkamp lives in Lindenthal with her German husband and two-year-old daughter.

After studying in Singapore and France, as well as stints in Hamburg and Munich, Cologne has become her second home. "I know it's probably not the most beautiful city, but it's the most lovable. This is where I like to live and have a good life."

(Photo: The young athletes were able to try out how to form sushi rolls at the youth hostel. )

For the sushi course at the youth hostel, she had brought along professional chef and instructor Kaoru Iriyama from the cooking school, who had traveled from Berlin.

"Originally I studied political science, but then I switched to cooking because that was my great passion," she says.

Trained by grandmasters and celebrity chefs in Tokyo, she is now a sought-after show cook on TV and an expert consultant for restaurants. She sees herself as a guide to Japanese cuisine. After all, there's a lot more to it than just sushi."

This is also the approach of Wickenkamp's culinary academy. "Our seminars and training courses are mainly aimed at professional chefs and staff in the catering industry," she says. "Through the online programs, we have participants from all over the world - now and then someone from Cologne is also there."

Link to the Master of Japanese Cuisine Academy: